As the summer temperatures start rising, a lot of people think about buying an air conditioner for their family.

Buying an AC is an important financial decision for two reasons:

In this article, we will start with the basics like the capacity or tonnage of an air conditioner and then understand the meaning of EER and ISEER values. In the end, we will learn about BEE star rating labels and how to interpret the information presented on those labels.

Capacity or Tonnage of an Air Conditioner

Cooling capacity of an AC is determined by the rate at which it removes heat while in operation. This heat is measured in British Thermal Units (BTU).

From WikiPedia, 1 BTU is defined as the amount of heat required to raise the temperature of one pound of water by 1 degree Fahrenheit.

This is a very technical definition and it would confuse a lot of people. Therefore, cooling capacity of air conditioners is measured in Tons.

1 Ton AC capacity is equal to the amount of heat absorbed or removed by 1 Ton of ice in 24 hours.

Now, that we know what is meant by the capacity of an air conditioner, we can move on to the definition of EER.

Energy Efficiency Ratio or EER of an air conditioner is defined as the ratio of amount of heat removed by the AC in an hour to the amount of electricity consumed.

This means that you can write EER using the following formula:

As you can see from the above equation, more efficient air conditioners will remove larger amounts of heat while consuming the same amount of electricity. Therefore, higher EER value means more BEE star ratings and more electricity savings.

EER values on BEE star rating labels are given as W/W. However, our first equation defines EER in terms of BTU/hr/W. Therefore, we will have to convert our BTU/hr value in Watts. To do that, we will need to perform some calculations using the following equation.

Here, 1kWh is 1 kilowatt power consumption for 1 hour. So, we can rewrite the above equation as:

Since EER is defined as the ratio of heat removed per hour to the power used for removing it, an AC with higher EER will result in more power savings.

Lets begin with the official definition of ISEER and then understand how this new system provides more accurate and useful results when labeling air conditioners.

There are two major problems with EER method that Bureau of Energy Efficiency has been using so far to rate different air conditioners.

Both these assumptions result in EER ratios which don’t have much practical significance in real life. The new ISEER rating system is aimed at solving both these problems by defining new parameters.

However, real life conditions are very different from test conditions. In real life, the outside temperature keeps changing throughout the year. Not only that but the temperature is different in different Indian cities even at the same time of year.

To calculate the energy efficiency ratio more accurately, the Bureau of Energy Efficiency decided to take the seasonal change in temperature in account. This gave rise to the term ISEER which is defined as Indian Seasonal Energy Efficiency Ratio.

The Bureau has defined a temperature range of 24-43°C to calculate the ISEER ratings. It also calculates the average number of hours in a year for which the temperature stays at 24°C, 25°C, 26°C and so on up to 43°C. This average is based on the weather profile of 54 different cities in India. Here is a table taken from the official BEE star label website.

As I have mentioned earlier, the EER ratio assumes that the power consumption for an AC is always going to be the same during whole operation. However, inverter air conditioners run at different capacities at different to ensure maximum electricity savings.

This means that we will probably get a wrong value when calculating EER for inverter air conditioners.

Bureau of Energy Efficiency solved this issue by calculating the total energy consumption over all seasons. This means that even if an inverter AC adjusted its speed according to different conditions, the tracking of power consumed over the course of an entire year will accurately account for it.

Another advantage of using ISEER values is that it gives consumers a rough idea of the electricity consumed over the course of an year. One thing that you have to remember is that the amount of energy consumed is calculated by assuming that the air conditioner was used for 1600 hours in the entire year.

As we mentioned in our post titled, BEE Star Ratings — The Complete Guide, the star rating labels for different appliance provide different information based on a variety of factors.

To a common user, BEE star labels for refrigerators are the easiest to understand because they directly state the energy consumption in a year. However, BEE star labels for air conditioners consist of values like EER and ISEER which are not used in daily life. Moreover, there is no direct way for users to get number of electricity units consumed in a year by using the EER and ISEER values.

Here are two labels from the years 2017 and 2018 respectively which show the EER and ISEER values for a refrigerator. 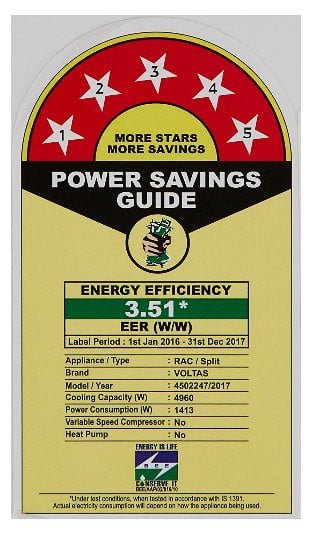 You can see in the above image that the BEE star rating label only shows values like EER (Energy Efficiency Ratio), cooling capacity and power consumption. It does not say anything about the electricity consumed in a year. 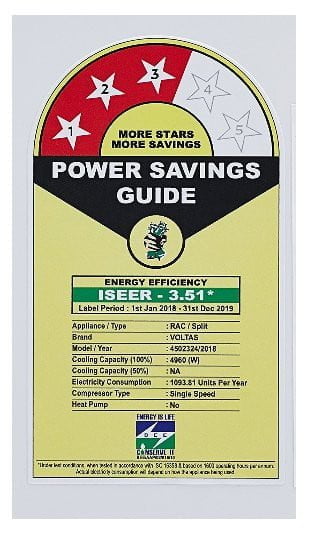 Starting from 2018, the label has started using the ISEER (Indian Seasonal Energy Efficiency Ratio) value. This was primarily done to use the same rating system for both Inverter and Non-inverter ACs. Unlike a regular air conditioner, an Inverter AC does not always run at the same fixed capacity so its power consumption will be different in different conditions.

To resolve this issue, BEE started using ISEER values while rating air conditioners. I have already explained both EER and ISEER in detail. All you need to remember now is that higher value of ISEER means lower electricity bill.

Some of you might have noticed that the SEER and ISEER values are same in both the images. However, the first AC has a 5 star BEE rating while the second AC had a 3 star BEE rating. This is because the labeling period is different for both the models. This brings us to an important point. Always check the label period for a BEE star rating when buying an AC. These values are updated from time to time so make sure you don’t get tricked into overpaying for an AC because of its 5 star rating from past years.

The previous section showed you how the star ratings keep changing for different air conditioners from time to time. Therefore, it is important to know the label period for an air conditioner before you make a purchase based on its star ratings.

In the section, we have gathered data about EER or ISEER values and star ratings for air conditioners from the Bureau of Energy Efficiency in different time periods. 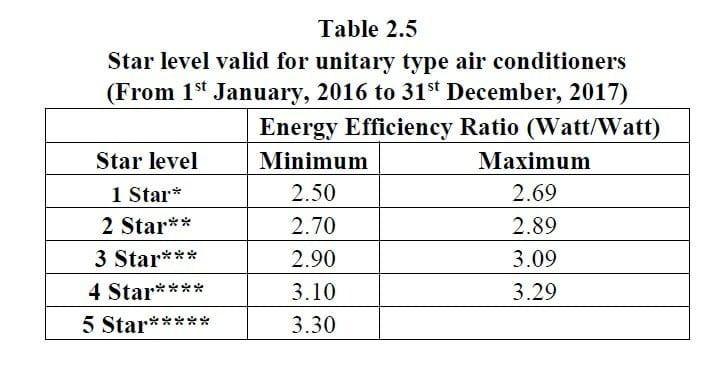 BEE proposed that the ratings should be improved for window AC during the label period 2018 to 2019. This proposal was then rejected because the market share of window air conditioners is declining every year. Therefore, manufacturers said that it would be impractical to focus their research and development on improving the efficiency of window AC as their market share does not justify the extra effort.

The proposed BEE star rating for window AC from 2018 to 2019 are shown in the image below.

After considering all the points made by manufacturers, BEE finalized the following star rating system for window AC during the period 2018 to 2019. 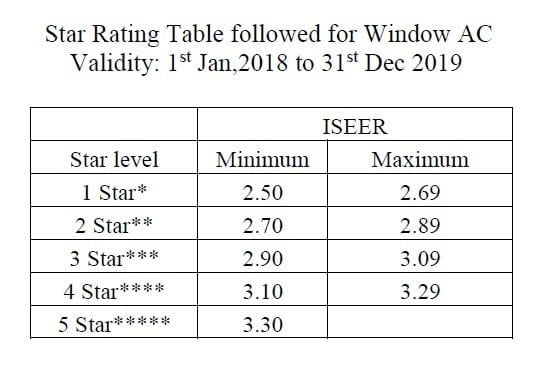 It is evident from all these star rating tables that the star ratings for window AC have not been updated for a long time. The only thing that has changed in 2018 ratings is that the EER ratio has been replaced with ISEER ratio to maintain consistency with split and inverter AC. 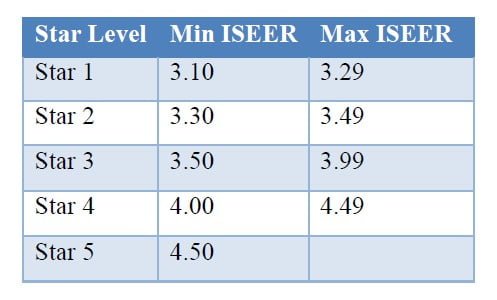 When you are looking at the BEE star ratings of an AC before deciding if you want to purchase it or not, you should keep following points in mind.

You can find more tips related to purchasing an air conditioner in our AC buying guide.

If I brought a split AC 5star having BEE rating of 2018. Does it become 3 star in 2020-22 on words? Than why I will buy it spending more money for saving electric bill for only 1-2 years.

The efficiency of the AC does not change. The AC will still consume almost similar amount of electricity. The change is in the rating system used by BEE.

For example, lets say the criteria for intelligent students (in 2018) is if they score over 85%. After two years (in 2020), the criteria might increase the percentage to 90%.

This means that students with 88% marks would not be considered intelligent in 2020. Their marks don’t change at all. Only the criteria for intelligent students changed.

The same thing applies to BEE star ratings of AC. A 5 star AC will consume the same amount of electricity in 2018 as it will in 2020.

However, the criteria of 5 star AC is made more strict after two years to force manufacturers to produce more energy saving Air Conditioners.

I hope this cleared your confusion. If you have any doubts, please feel free to let me know.

Hi. I am planning to buy an inverter 5 star rating ac now. But the current bee ratings are valid till 31st dec 2019 and as its mid september already should i wait till january to buy an ac with improved bee ratings?

If you want to buy a more efficient 5 star inverter AC, it would be better to buy it next year after manufacturers start using the updated ISEER ratings.

Just make sure that you double check that the labels on the AC units mention the label period 1st Jan 2020 – 31st Dec 2021. This is because people will still be selling the old stock of 5 star inverter ACs in early 2020.

Let us know if you have any more doubts.

What are the COP levels for star rating as per BEE

The COP or Cofficient of Performance is the ratio of Cooling Capacity of the AC and the Power Input provided to it. This might sometimes also be divided by a degradation factor.

There are no specific ranges for COP based on BEE star ratings. This is because it is calculated at four different capacity points (25%, 50%m, 75%, 100%).

To simplify things, the BEE gives consumers only one ISEER rating that gives weightage to all the COP levels.

In terms of COP, the only thing BEE specifies is the minimum value of COP for different input powers at 100% load.